Things to Do in Sri Lanka 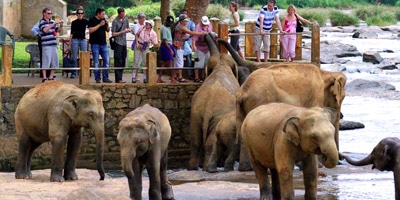 The Pinnawala Elephant Orphanage, established in 1975, commenced with seven orphaned elephants. Today some of these orphans enjoy the fortune of seeing their grandchildren born in the same location. The original objective of establishing the orphanage inclined more towards tourism, but soon became a conservation and educational center. With the help of local and foreign elephant experts, Pinnawala started a scientific captive-breeding programme for elephants. The free movement of the herd enhanced the chances for respective individuals of both sexes to get together and mate. The nearby river played a dominant role in this regard, and in 1984, the first baby of Pinnawala was born. The success story of Pinnawala has drawn the attention of scientists from all over the world. A considerable number of books and research on Pinnawala have been published in several languages. The members of the Pinnawala herd have been filmed, videoed and photographed thousands of times by professionals. 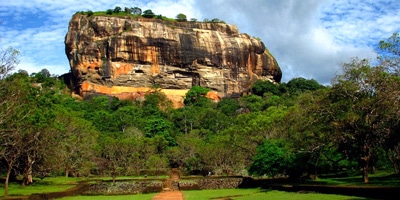 Visit Sigiriya and climb the 5th century Sigiriya rock fortress which is a World Heritage Site, built by King Kashyapa (477 – 495 AD). The ‘Lion Rock’ is a citadel of unusual beauty rising 200 meters from the scrub jungle. The rock was the innermost stronghold of the 70 hectare fortified town. A moat, rampart and extensive gardens including the renowned water gardens ring the base of the rock. Visit the world-renowned frescoes of the ‘Heavenly Maidens’ of Sigiriya, which are in a sheltered pocket of the rock approached by a spiral stairways. These frescoes are painted in earth pigments on plaster. 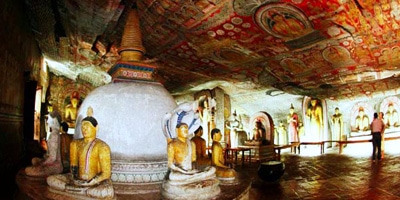 In the city of Dambulla lies a hub which has been treasured by many kings since the 1st century BC. Located at an elevation of 1118 feet from the sea level rises a massive rock from the surrounding plains of Dambulla of 600 feet high and over 2000 feet in length. It is home to the World’s most acclaimed Cave complex of magnificent Buddha images and Rock Paintings of vivid colors and shapes constructed and painted from around 2nd Century BC and continued up to the Kandyan era of the 18th Century. Sinhalese people call it as ‘Dambulla Gala’ and the Temple is called as the ‘Rangiri Dambulla Viharaya’ (Golden Rock Dambulla Temple). 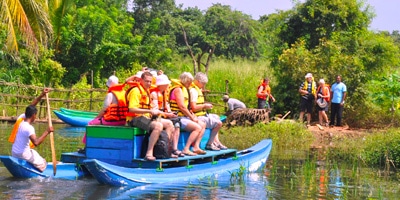 Do the village tour which is a 3 hours trek through this archetypal Sri Lankan village. The trek begins with a scenic walk along a bund of a Wewa (man-made reservoir). The amazing bird life, butterflies and possible sightings of crocodile only add to the charm of the trek. Sight of the villagers as they go about their early morning tasks of fishing or washing clothes at the periphery of the lake. Initially one wades through a shallow stream and thereafter crosses a wider tributary in a catamaran of an obliging farmer to inspect Chena cultivation (slash and burn agriculture). Enjoy the farmer’s humble hospitality. Wioth the guidance of the farmer, pick some fresh vegetables from the plot. 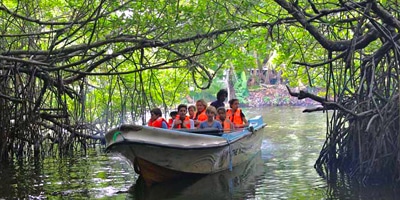 Balapitiya is where one could just sit back and observe how ecology and culture combines under the sun. Cut through the clear water of Madu River – a lifeline of Balapitiya – and head towards Kotu Duwa, the small island housing a temple that dates back to ancient Sinhalese kings. Or sail through tunnels of shady mangroves swaying alongside Madu River – hiding an ecological treasure – to witness the tranquility of this biodiversity hot spot which boasts of reptiles, mollusks and over 70 species of fresh water fish. Today the region – which is strong in observing rural folk life in the island – does not only boast of cinnamon plantations in abundance, but also has a fine ‘Fish Pedicure Center’ – one of the most potent & last rejuvenation techniques. Apart from these amenities Balapitiya has also become a household name in the minds of bird watchers ensuring a thrilling offshore experience. 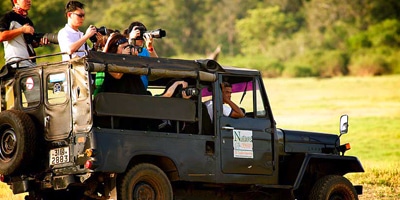 Do a jeep safari at Yala National Park. Spreading into a vast 1259 sq km Yala – with its glory spinning around vast grasslands, shrubs, tanks and dunes – rightfully is the heartland of wildlife in Sri Lanka. As your jeep rumble through the giant gates of Yala, you are not only stepping into the most visited national park in the country, but also the lands of a civilization which thrived during the reign of Sri Lankan kings. You name it, and Yala has it! Its usual inmates cover herds of elephant, sloth bear, spotted deer, jackal, extensively populated bird life as well as the highest density of leopards in the world that garnish the park to be one of the finest destinations in the country. Feel the rough track as your jeep thunders over rocks and swish passing narrow bends for an exhilarating experience blended with the cries of wilderness under the tropical sun. 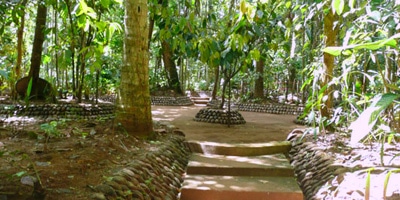 An agricultural zone in the central province, Matale seldom drops off the maps due to its remarkable contribution through flagship crops of the island extending from tea, rubber & vegetables to spices. Spearheading the Rebellion back in 1848, Matale today takes immense pride in its story woven around spices. Stop by the side of a spice garden – into which you will be most welcome – and observe the therapeutic values of spices & processes over a refreshing cup of herbal tea! Or spend sometime idling on the hardened streets if you mean a real town adventure filled with voices and colors. 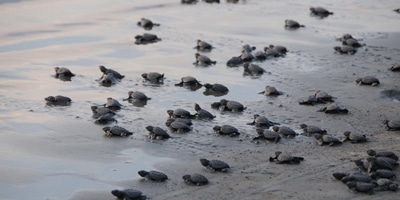 Visit to a Turtle Hatchery in Kosgoda. Both locals and international volunteers battling it out for “Sea Turtles’ Sake” is a common sight at Kosgoda. This vibrant tourist destination sitting calm along the southern coast of Sri Lanka – apart from its traditional industries of fisheries and cinnamon cultivation – was later recognized by the Wildlife Protection Society who studded the region with a Sea Turtle Conservation Project which operates on a formidable scale today. Indirectly, this has become a watering hole of flipper & shell enthusiasts! 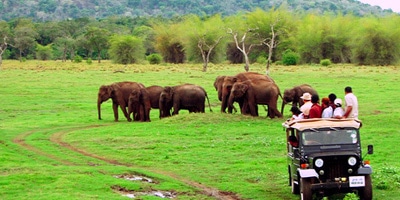 Being part of the elephant corridor which joins up with Kaudulla and Wasgomuwa parks, Minneriya National Park gives the opportunity to see herds of Elephants throughout the year. May to October is the best period to visit Minneriya National Park in view of the famous Gathering of the wild elephants. It is the largest known meeting place of Asian Elephants in the world. During this period herds up to 300 elephants are seen at the 8,890 hectare park within a few square kilometers of the Minneriya Reservoir. In August and September each year during the dry season, wild elephants from the surrounding wilderness in search of food and water, makes their way to the shores of the Minneriya Reservoir adjoining the Minneriya National Park. Huge herd of elephants, sometimes numbering up to 300, converge together within a few square kilometers of the lake. 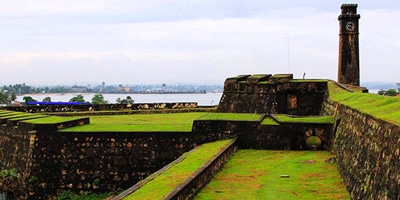 Galle, the epic southern capital, is the intersection where classic Dutch architecture meets a tropical setting creating a vivid atmosphere in beauty. Walk the Dutch haunted streets listening to the creaks of wooden saloon doors and observe how European architecture mingles with South Asian traditions today flooding cultural enthusiasts on a global scale. Its original ramparts and bastions preserved up to date showcase evidences of a heritage preserved for more than 3 ½ centuries. Walk clockwise within the fort to observe the ‘old gate’ carrying the British coat of arms. Flanking the old gate is the Zwart bastion – the oldest of all – and the lighthouse standing 18 feet in its glory next to the Point Utrecht Bastion. This Dutch bliss is painted with streets that spread in a rectangular grid pattern pierced with houses carrying Dutch colonial style verandas. Hop into the Dutch Hospital Shopping Complex to be mesmerized by an array of souvenir selections. However, its hallmark stands a reality where the Dutch Fort remains a working community with its usual buzz of administrative offices, court complex, commercial buildings, churches and southern folks frequenting its streets bracing the air of the Elysium of architecture, Galle!

Kandy is a large city in central Sri Lanka. It’s set on a plateau surrounded by mountains, which are home to tea plantations and bio diverse rain forest. Kandy was the last capital of the Sri Lanka kings and is a World Heritage Site. The name ‘Kandy’ conjures visions of splendor and magnificence. Many of the legends, traditions and folklore are still lovingly kept alive. Drive around the Kandy Lake built by the last Sinhala king, Sri Wickrama Rajasinghe in 1798. Visit the Kandy town, the bazar, an arts & crafts center and a gem museum / lapidary. Also visit the Temple of the Tooth Relic and thereafter witness a cultural show.

Visit to Botanical Garden at Peradeniya 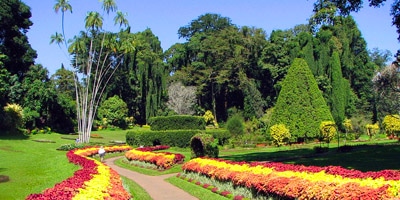 First developed as a pleasure garden under royalty and later harmonized by the British, the Royal Botanical Garden of Peradeniya – today bundled with the most welcoming facilities located just 4 miles off Kandy – is a flourishing national asset in the Wonder of Asia. Walk in to this 147 acre bliss of an experience, passing well tended lawns, pavilions & an octagon conservatory to be greeted by the vast expanse of a magnificently landscaped lush green turf which will encourage you for an exhilarating break. Towards the north of the entrance rests a cafeteria that one might come across before stepping into some of the highlights – the orchid house & giant Javan fig tree – of this place which overflow in grace.

Sri Lanka, Tea and Tourism are words which cannot be separated. Take a tour to the cold & misty hills that take pride of an ultimate tea tour, covering lush green blankets of tea plantations. Or just step into a tea factory processing the prestigious brand of Ceylon Tea, to observe a rich tradition kept alive up to date. As you observe the hissing and swishing of machines, inhaling the heavenly scent arising from these facilities, make sure to end your day in style over a perfectly blended cup of pure Ceylon Tea. 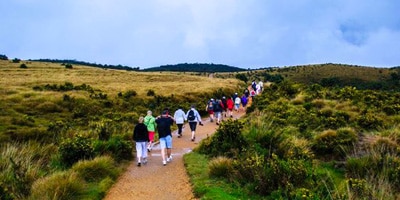 Horton Plains, UNESCO World Heritage Site, trekking paradise and Eco tourism hideout in the heart of the isle, painted with unending stretches of green pastures marks one of the healthiest wet evergreen forests in Sri Lanka. With an altitude above 7000 ft, the plateau sweeps to a robust 3169 hectares sheltering flora and fauna varieties that may be found nowhere else on earth. As the tributary of Belihul Oya – Bakers Falls – thunders down rocks head along the 9km trekking path – across frost – covered grass – to feel the icy cold wind against your face. You may even gaze down World’s End, a head-spinning 3700 ft drop towards the southern end or drive carefully through herds of sambar deer, shy to human touch & bird life chirping across the plains. If you’re cautious enough you may be greeted by  the sights of a grunting wild boar, a pouncing fishing cat, otters or even the ‘Spotted Ghost that haunts the plains’ the Sri Lankan Leopards!

Polonnaruwa which was the 2nd capital city of Sri Lanka built in the 11th and 12th centuries AD and which is a World Heritage Site. Here you can see the ruins of the Royal Palace, the Gal Viharaya where 4 splendid statues of the Buddha in ‘Upright’, ‘Sedentary’ and ‘Recumbent’ postures carved out of rock could be seen, the Audience Hall, the Lotus Bath, the statue of king Parakramabahu and the Parakrama Samudraya – a lake built by king Parakramabahu the great. There are alsomonuments of famous places of worship such as the Shiva Temple, the Lankathilake, the Vatadage, the Galpotha, the Kiri Vehera and the remains of a former Temple of the Tooth Relic.